Awards season is here – and, drumroll please – Trex is on top once again!

At Trex, we’re fond of saying that “green is our favorite color,” which is why we’re so proud that Trex was named the “greenest” decking in the industry by the readers of Green Builder magazine. 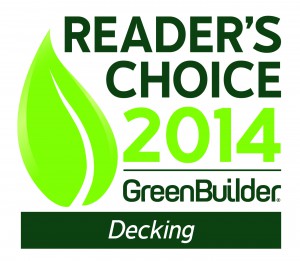 This latest honor comes on the heels of recognition by the readers of Builder & Developer, Green Home Builder and BuilderBytes.com, who collectively ranked Trex the number one preferred decking brand in Peninsula Publishing’s 2013 Building Products Brand Survey. Peninsula Publishing solicited feedback from professionals in a year-long reader poll conducted through its print titles, websites and LinkedIn and Facebook pages. Manufacturers were ranked in more than 50 different categories, including decking, where Trex, once again, claimed the number one spot for brand recognition and preference.

We’re especially proud that these accolades reflect the opinions of our valued professional partners, and are honored to be your decking of choice!

The results of Green Builder Media’s 2014 Reader’s Choice Awards appear in the March edition of Green Builder magazine. Peninsula Publishing’s 2013 Building Products Brand Survey appeared in the February issues of both Builder & Developer and Green Home Builder, and may also be viewed online at www.bdmag.com.